In Mathematics, Pascal’s Triangle is a triangular array of binomial coefficients.The rows of Pascal’s triangle are conventionally enumerated starting with row n = 0 at the top (the 0th row). The entries in each row are numbered from the left beginning with k = 0 and are usually staggered relative to the numbers in the adjacent rows.

The triangle is constructed in the below manner:

For example, the initial number in the first (or any other) row is 1 (the sum of 0 and 1), whereas the numbers 1 and 3 in the third row are added to produce the number 4 in the fourth row.

Equation to generate each entry in Pascal triangle:

for any non-negative integer n and any integer k between 0 and n, inclusive. This recurrence for the binomial coefficients is known as Pascal’s rule. Pascal’s triangle has higher dimensional generalizations. The three-dimensional version is called Pascal’s pyramid or Pascal’s tetrahedron, while the general versions are called Pascal’s simplices. 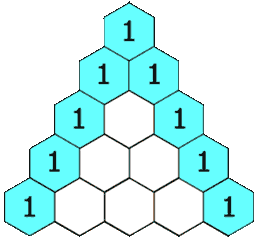